For I Know the Mazes I Have for You

I went to my first corn maze today. Is this a southern thing? I hadn’t ever heard of them before until I moved to the south. Then again, I didn’t have kids before…so maybe it’s an “I have kids” thing? Anyhoo, today I corn mazed it.
Combined, the entire corn field maze was approximately four miles if you did all sections. Jaana and I entered full of vim and vigor (what in the world is vim and vigor, anyway?), armed with our map, ready to conquer the world.
The map showed us our entry point and how to navigate the maze. Also included were various numbered checkpoints we could use to mark our progress. As we reached a checkpoint we could punch the number on our map.
We started off and Jaana led the way. She decided which turns to take, which loops to avoid and ran to each checkpoint as we discovered it.
After about half an hour she started taking drink breaks every two minutes.
Another 15 minutes later, she complained about being hot so we stealthily took off her long-sleeved t-shirt that was under her short-sleeved t-shirt. (Thank goodness for tall corn stalks.)
Another 15 minutes later, she was done. She didn’t care any longer about punching her map with the checkpoints she reached. She just wanted to get out, the easiest way possible. And quickly. After all, there was a horse and buggy ride and corn box calling her name.
We got five out of 10 checkpoints punched on our map.
We were just your average mazers.
I don’t blame her for wanting to give up. We felt like we were walking in circles. Everywhere we looked we saw the same view of dried up, brown corn stalks. She knew there were other attractions just outside the corn maze. They were enticing and new. So she gave up.
Halfway during the maze I took this picture:

Were were just about smack-dab in the middle of the maze. All we saw around us was the same thing. Lifeless, dried up corn. A seeming no way out. Even though we had a map…even though we were given checkpoints to mark our progress…we still felt lost.
But while all we saw was where we were, God saw this: 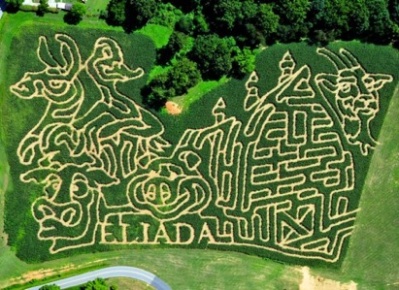 God had the ariel view. He knew exactly where the entry point and exit point was in the maze. He knew exactly where we were in the maze; knew every checkpoint we had reached and which we avoided in an effort to get out. He even knew the beauty of each section and how they weaved together. (Notice the llama, cow, pig, duck, barn and goat?)
He saw our way out and saw where we were going.
We had the map, but He had the blueprint.
So often I go into a maze God has for my life. He gives me a map (the Bible) and shows me the various checkpoints where I can make sure I’m not in the middle of nowhere.
Is there fruit?
Are you seeking Me first?
Are you worrying about tomorrow?
Are you looking to the right and to the left or straight ahead?
But about halfway through, I usually want to give up.
I start with frequent breaks from praying and communing with God.
Then I start complaining and find ways to feel more comfortable.
Then I just get frustrated and am done. Find the easiest way out, and move on to a more seemingly exciting activity that distracts me.
And I end up with only half of the blessings God intended for me to receive along the way.
The intention of my day was to enjoy a much-needed date day with my little girl. The goal was simply to have fun…not to have a spiritual lesson infused into it. But as I stood there, not sure of where we were headed but moving forward anyway…I was jolted with the awareness of how much my life paralleled that stinkin’ corn maze. How I think these new adventures with God are fun at first, then I’m inconvenienced. How I have all the faith in the world until it gets too hot and I want a break. How I don’t think it will really take as long as it ends up taking.
And I kinda felt like a spoiled brat.
I tried to turn that lesson into a learning experience for Jaana…but then felt a tad hypocritical seeing as how I’m 37 and she’s just six and I’mstill trying to figure out this perseverance thing.
So when she said she wanted to just get the heck outta dodge (my words, not hers), I nodded, said “sure thing, baby” and we walked out through the in door.
There were no raspberry berets, but there were pedal carts. And little-people hay bale mazes where you had your own up-front ariel view. And a horse and buggy ride for which she got picked to ride up front.