The Playground and the Meadow

The playground has a castle and a drawbridge and three slides and a climbing wall. There are tire swings and baby swings and regular swings and even big red chair swings the adults can sneak onto if there aren’t a lot of kids around.

When we’re at the playground, my kids are wild and rambunctious and run around yelling and playing and leave every ounce of energy there. The surrounding fence keeps them IN and they swing and slide and climb and run and there’s just so much to DO there.

The Meadow is a wide-open space with exposed granite and a gentle stream. It was made to be a ‘backyard’ for our mountainous neighborhood full of wild hills and forests of trees. There’s one pond and one picnic table and six Adirondack chairs. The stream has tadpoles and the pond has rocks at the bottom from two summers ago when my littlest toddled over, crudely tossing in every pebble he could find.

An army of trees circle the Meadow – more a protective shield than a boundary line – and cast long, lean shadows over the stream and the pond and the exposed granite. In the late afternoon, the sun peeks through with a wide smile like it’s trying not to get caught in a game of hide and seek.

In the Meadow, my kids imagine they are Susan and Edmund exploring Narnia, defeating the White Witch valiantly. They chase butterflies and bring me dandelion bouquets and pretend the big oak is their secret hide out. He chases after her, desperate to be big like she is, and she holds his hand as they cross the slippery rocks so he doesn’t fall and scrape his knee yet again.

In the Meadow, there isn’t as much to DO – there are no swings, or slides, or castles – but there’s so much to BE. In the Meadow, they are free to Be imaginative, Be together, Be relational, Be intentional.

“He lets me rest in the meadow grass and leads me beside the quiet streams. He gives me new strength. He helps me do what honors him the most.” Psalm 23:2-3

I get caught up in the doing of the playground, too. My playground is ministry and work and friends and family and home. It’s joyous and blessed and holy and necessary. It can become a playground of To-Do’s though, if I’m not careful.

Read the rest over at Compassion That Compels today!

To read all the posts in the 31 Days series, click here.

What does being free look like? Freedom in Christ — is it being free from the wages of sin and death only, or is there something more?

Join me over at Be Still Be Free today as we discuss what it means to Be Free in our third podcast.

Wow, it’s been eight weeks since I’ve done a Five Minute Friday. I don’t even know what to say, I’m so disgusted with myself! So here goes, I’m back in the mix. Hope y’all will welcome me back with open arms!

I link up with Lisa-Jo on Fridays for a writing flash mob…throwing caution to the wind and gathering to share what a few minutes of free writing can buy.

Here, where the sky is an electric kind of blue — the kind that gives you a surging hope and anticipation for something wonderful.

Here, where the dandelion stands alone in the field.

Where I have this amazing view, and how can I not stand in awe that this is a moment I get to have, today?

Where life has #nofilter.

Where yesterday and tomorrow are hazy and gray and fuzzy and unclear, here and now is living in technicolor. It’s the warmth of the sun and the cool of the shade and the breath of the breeze and it’s soaking it all in because it’s too beautiful not to.

Where I embrace each moment He gives and squeeze every drop of life out of it because it’s just. perfect.

Where He shows me this is just one moment in a lifetime of endless possibilities of what He has planned, if I’d only let go and allow myself to just be.

Lifting the Burden of Emptiness (Beating the Blues #3) 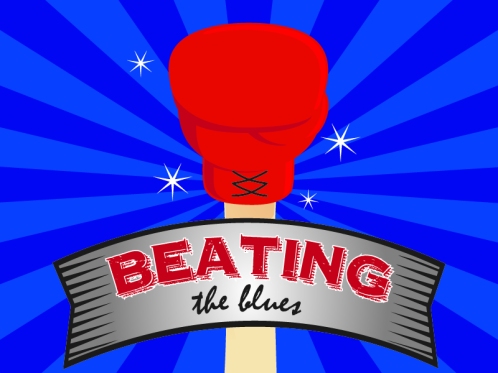 I’m honored to participate in our pastor’s current sermon series, “Beating the Blues” as a guest writer. Here is the third and final installment:

She was sexually abused as a child and often escaped to shelters and as a teenager, the depths of depression led to thoughts of suicide because the yoke was too heavy to carry.

That yoke – it wasn’t made for her to carry, though. So she took it off and gave it back and picked up another one. One that was light and easy. And today she walks tall and free.

She is a mom and works full-time and is a caregiving wife to her husband who is recovering from a near-fatal accident. It’s been years and some have told her it’s okay to walk away because the yoke is too heavy to carry.

That yoke – it wasn’t made for her to carry, though. So she daily reminds herself to take it off and give it back and picks up another one. One that is light and easy. And some days are easier than others but she still walks tall and free.

After her parents divorced, when she was well past the age of innocence, her mom got caught up with the wrong person at the wrong time and went to prison. And she spent eight long years without her mom at her side – without laughter and lunches and teas and tears. And for a very long time, the yoke wore her down and all she could do was crawl under its weight, knees bloodied and hands calloused.

That yoke – it wasn’t made for her to carry, though. And some days…often, really…Satan tries to convince her to pick it up and crawl around under its weight again. And she has it in her hands and is about to place it on her back when she remembers it’s not hers to carry. So she puts it down and picks up the light one, the easy one, and stands tall and free and carries on.

It’s like there are two groups of Christians and we’re all in a giant and lush field of green pastures. And on one side is the group who still carries their heavy and hard yokes. And some are even really proud of their yokes. And they sand off the rough patches and polish it up so it looks pretty but they still carry it and are crushed in both body and spirit.

And on the other side of the field is the group who have laid down their heavy and hard yokes and are instead yoked up with Jesus – light and easy. And they are all side-by-side with arms linked and in the middle is Jesus…face bright and smile as wide as east and west and as a group they are all yelling, “Red Rover! Red Rover! Send yourself over!” and when one decides to finally break free and leave behind the heaviness, Jesus breaks away to embrace them in a hug of grace and everyone cheers because finally…just finally.

It’s up to us to decide to break free. Jesus says, “Come to me…Take my yoke…Let me…” It’s an invitation for action on our part. He won’t take it away unless we come and take and let.

He invites us to act. Always and forever.