I link up with Lisa-Jo on Fridays for a writing flash mob…throwing caution to the wind and gathering to share what a few minutes of free writing can buy.

He used to be fuzzy and bright red but now after three years his fur is matted and the color is dark and even though I wash him regularly, there always seems to be some sort of an odor to him. Paxton can’t go to sleep without him. His name has even changed  — he’s not just Elmo anymore, he’s Better Elmo. 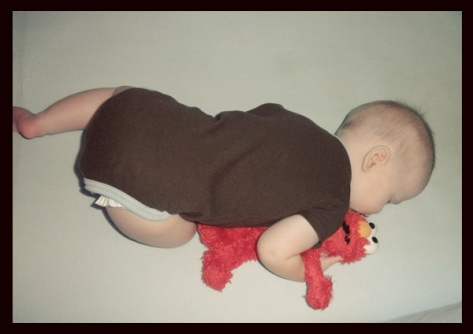 We walk into school and he’s always hesitant at first, saying he wants to go home with me. We hang up his backpack and take off his coat and he greets his other friends and gets excited about playing dinosaurs. “Mommy, look! It’s T-Rex! Rawwrrrrrr!” and before he speeds off I remind him to give Elmo a hug and a kiss and put him down for a nap in the backpack. He cradles him close and kisses his head and lays him down. 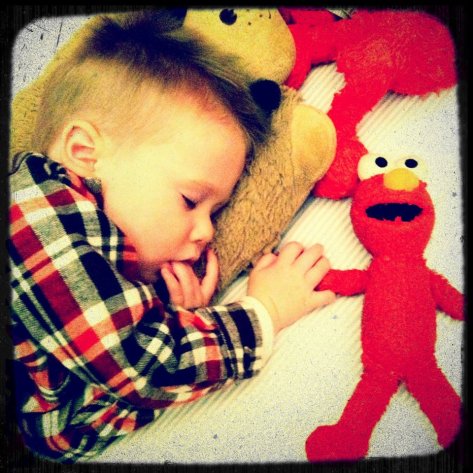 I pick him up from school and he bursts forward from the throng of kids with a “Mommy!!!!” loud enough to rattle my heart just enough and he leaps into my arms with the biggest hug his little arms will give. And after a snuggle and a kiss he is as predictable as my mediocre cooking and says, “I want Better Elmo.” And we pull him from his quiet slumber and Paxton squeals with delight and gives him the biggest hug Elmo’s worn out body can handle and plants a huge kiss on his head.

His love is pure and simple and unwavering and his joy is pure when he’s with his Elmo. He doesn’t care how tattered and beaten he gets; when his mouth is ripped open at the seams and he looks a bit like Santa…when the back comes open and the lost stuffing leaves him skinny and emaciated…when he’s covered in leaves and dirt from bringing him with him to play…it just makes him love even more.

Because right there, before my very eyes, is God’s love for me. He has never let me go. He squeals with delight when I’m with him. Even though I’m tattered and beaten and often ripped open at the seams, He doesn’t care. It just makes Him love me more. In fact, He calls me Better, too. (<= tweet that)

I joke often that Elmo is going to be hidden in his wife’s bouquet someday when she walks down the aisle, and that she’ll tip her flowers to him just enough to see Better Elmo smiling at him once again, mouth wide and matted fur even darker red than he will have remembered. A reminder to him and to me that cherishing the broken is simply being like Jesus.