So here’s where I’m at mentally:

You’ll forgive any grammatical issues and typos, yes? And the fact that I’m not just a week behind in blogging, but also pulling an 11th hour college try at getting this one done on Thursday. Yes?

God bless you. I receive your grace in droves.

Indeed, I missed last week’s Thanksday. But in my defense, we spent 11 hours driving to Virginia Beach that day for Greg’s graduation. (The trip should have taken eight and a half hours, but alas — kids.) And I just didn’t have the post ready to go ahead of time. I tried to write in in the car, but have you tried typing with as much verbosity as I prefer on an iPhone? Ridiculocity.

Prior to the trip, I was up to my roots getting work done, and in addition to all of that, I had a birthday. Yep, I’m now officially 39 forever and ever amen. I decided I wasn’t working that day — but all that means is that I didn’t respond to all the email I still read. (Taking birthdays off was much easier when I was single and I didn’t have a computer at home or a smartphone. I actually enjoyed my day. Novel concept.)

(Well, that and I was still in my 20s and had my youth, a smoother complexion and a higher metabolism.)

So call me a slacker if you want to. But I’ll just blame it on aging.

However, age and wrinkles and adult breakouts due to PMS aside (whaaaatttt?), I’m still thankful. This week’s proud recipients of my gratitude are (in no particular order):

1. Wilmer Valderama. Greg and I watched the movie Larry Crowne recently on a whim. I really didn’t know what it was about, other than Tom Hanks and Julia Roberts being in it. And surprisingly, it was ADORABLE. It was sweet and clean and funny…I was very pleased. But my most favorite thing was Wilmer Valderama. Because all he had to do was walk into the scene and open his mouth, and I’d die laughing. DIE. Maybe it’s residual laughter from That 70s Show…or the fact that I know him best now for his riveting work on Handy Manny. At any rate, cue Wilmer and I. die. That’s talent.

2. Girlie Talk at Night With Jaana. It’s become a part of our nightly routine that Jaana and I lay in her bed together and have girl talk. Sometimes she’ll tell me about what’s happening with friends at school. Sometimes we’ll talk about God and she’ll ask really amazing questions. And sometimes I’ll tell her stories from my life.

The other night she had spent forever working on something for my birthday that seemed to have fallen apart right at the very end. She came downstairs crushed and sobbing. Greg helped her fix it, and then when I tucked her in, we talked about how sometimes things don’t go the way we want them to and God has other ideas. She stared at me blankly and said, “like what?” So I told her a few stories about my own life — about the apartment I wanted that didn’t work out, but another one was even better. About how I was mad at God when Daddy came into my life because I didn’t want a boyfriend, but then it was just meant to be. She was riveted, and then said the sweetest thing,”Tell me one more! Just one more, please? You’re life is so fascinating!”

I would have said my life was interesting, for sure. Difficult at times, and heartbreaking at others. Definitely fun. But “fascinating” is an adjective I would have never used. But you know…from the mouths of babes and all that.

So here’s to FASCINATING.

3. Travelers. My children are hands-down the best. travelers. ever. The car rides, the hotels, all of it. They are seriously easy to trip with. Coming back from Virginia it was just the three of us…Greg had to stay to begin his doctoral classes. We drove halfway on Saturday and stayed in a hotel, and by the time we pulled in I was ready to fall into a heap and drool. I was praying there would be a room service option so I wouldn’t have to unload, get to the room, go back down and get back in the car. Praying like I’d never prayed before.

And lo, the Lord heard my cry. And He answered me.

First we got warm cookies upon checkin. Then the kids got bathed, we ordered room service and just chilled. out. They were so happy to have the room service experience and had a ball giggling and talking before bed. Jaana was so excited she exclaimed, “Mommy. This MUST be a four or five star hotel.” Future husband, you got it easy.

Seriously. It took all that was within me not to climb into that empty spot and just snuggle to my hearts content…breathing in freshly shampooed hairs and cheeks. I could travel with them to the moon and back.

4. “Coincidental” Run-Ins. As soon as Greg’s graduation ceremonies were over on Saturday (in VIRGINIA no less), we walked all hot, bothered and sweaty toward our cars. We hadn’t gotten more than 100 yards at the most when I thought to myself, “look at these pretty people walking toward us.” It was a couple who looked like they belonged on a red carpet in LA. (Which ironically, I’m sure they’ve been on recently.)

We used to work together…back in The Big City, back in the day. We worked for an ad agency — he in creative, me in account management. He was always a very strong Christian…and I was too…except for all the floundering I was doing at the time. I’m convinced his encouraging words and knowing he and his wife were praying for me saved me from myself. SAVED. ME.

At any rate, we both left the agency to pursue the next path God brought to our lives; I quit the business and they did too…moving to Europe and LA and all over the place being missionaries. And while we kept in touch initially, we eventually lost touch.

And we literally bumped into each other in Virgnia and are now Facebook friends.

You can call it what you want to — random, accidental, whathaveyou. But to me it was divine. And even though it was Greg’s graduation, it was as if God was saying,

(God calls you girlfriend, too, yes?)

5. Dedication. Greg graduated from Regent University last weekend, with his Master of Arts in Organizational Leadership. On Monday, he began classes for his Doctor of Strategic Leadership. I think I’m going to have to write a separate post about all this…because it’s swirling in my head non-stop.

Y’all. He was selling classroom furniture to schools when we met.

And it was an important and successful job. But was also so clearly not Greg’s calling. So to see God just keep on presenting doors of opportunity to Greg; to watch him walk through them even with uncertainty, doubt and fear…has been unbelievable. Every step of his journey is just bringing about his calling with more clarity than the step before. I’ve been emotional about it all week. Greg has worked so hard for his accomplishments, and with every one his direction is clearer and more purposeful. And I absolutely swoon thinking about it. He’s my hero. Hat and cape and all. 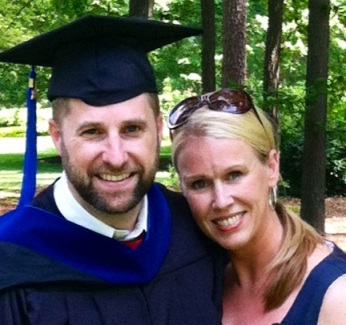 6. Cows. Because a cow made my little boy’s day complete.

7. Birthdays. So celebrating your 39th birthday is pretty uneventful and a little sad, to be honest. Because now there’s really just 51 weeks left to accomplish all those “before I’m 40” goals. However, if you have an eight year-old daughter, it’s a whole lot more fun.

She had it all planned out — breakfast in bed, orange decorations and theme for everything (my favorite color). And even a necklace and bracelet-turned-anklet (too big for a bracelet, perfect size for anklet) that she made herself. She made my morning so special, in fact, that I pulled her out of school at lunchtime to take her and Paxton out to celebrate. (‘Cuz that’s good Mommyhood…making your kids miss class time to make you feel better about yourself.) It was awesome.

8. Retractable Auxillary Cords. Because the cord I had connecting my iPhone to my AUX outlet in the car was about 50 feet long and could choke the kids and myself should I take any mountainous roads too swiftly. Thanks, Wal-Mart!

9. Second Grade Homework. Jaana’s homework all week was to work on a timeline of significant events in her life. We spent every night talking about her, looking at pictures of her, and planning a timeline of her. (She was in HEAVEN.)

In the process we found an old video from 2007 of her sitting at our kitchen table, talking and singing…and she was suddenly just so little. In my mind, the memories of her back then are with the her that is now. Like…the Jaana in the three year-old preschool movie in my mind is being played by the eight year-old version I see today. So to see and hear her talking and singing and sounding like a real-life four year-old totally threw me for a loop. On one hand, I was sad I can’t vividly remember that age without video. But it also made me realize that this will all pass in the blink of an eye, and to not take a moment for granted. And that she’s really not as mature as I think she is, because she’s just a babe.

So this afternoon when she begged to go to the park even though she was home from school and it was practically 5 pm, we went. And I took video of her leading us on a guided nature tour around the trails of the playground. Because when she’s 12, I want to remember her at eight…innocently showing us mushrooms growing on trees and a mound of mulch she called Mount Kilimanjaro. Knowing that she really wasn’t 12 in 2012, she was just a second grader.

10. Starbucks App. And the “Find Nearest Location” option. I couldn’t have taken two days to drive back from Virginia by myself and the kids without it. Could. Not. Have.

Your turn! Let me know what you’re thankful for this week and share the love. Leave a comment below or link up with Candra. It’ll ease the pain of getting older, and smooth out those deep wrinkles. For real!