Isn’t it ironic, that I do a weekly post of thanksgiving each Thursday, but didn’t on Thanksgiving last Thursday?


I wanted to post, trust me. And had it all ready to go in my head. The problem was with my computer, though. For one, I was out of town in The Big City and very busy with family and whatnot (and by whatnot, I might mean hair appointments, manicures and pictures with Santa). For two, my computer has decided to automatically shut down and reboot every single time I punch a letter on the keyboard.


So yes, I could’ve updated on my phone and posted that way. But have you ever tried to type more than one paragraph on an iPhone without any typos or auto-correct changes?


My computer is still on the fritz, by the by. The only thing saving me now is a borrowed temporary computer for which I’m trying not to fall in love with even though it’s a high-def, glossy-screened new iMac with like a 23″ screen.


So now that I have to make up two weeks worth of thanks, let’s get this ball a-rollin’.


1. Borrowed Temporary Computers. And all 23″ of their glossy, high-def screen goodness.


2. People That Can Help Fix Laptops.


3. Successful Santa Pictures. I took the kids to visit Santa while in The Big City last week, at the same place Jaana has had Santa pictures done for about five years. I wasn’t sure how Paxton would take to the whole affair. Jaana didn’t smile for a Santa picture until she was four years old. Her brother, though, took to Santa like I take to borrowed temporary computers with 23″ glossy, high-def screens. So much so, in fact, he pitched a naughty-list-worthy fit about leaving Santa. Fortunately, Santa is compassionate and didn’t count it against him.

My only worry now is that Santa will bring them everything on their list, because they’re so darn cute and how can he resist the cuteness?


4. Elf on the Shelf. We finally got our own elf here in our house, and we named him Simon. He’s turning into quite the mischief maker, it seems. He was found sitting in the ornament box with morning with my Starbucks coffee cup ornament in his hands like he was drinking it. Jaana bounds out of bed each morning dying to find him. He even changes spots while she’s in school. 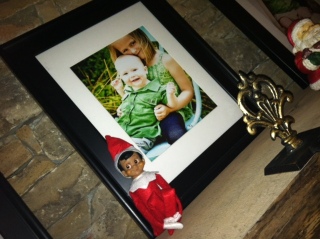 5. Stores Open on Thanksgiving Day. And no, I don’t mean the stores that opened early for Black Friday deals. I mean stores like Kroger, that I could run to at 10 am on Thanksgiving morning to re-buy all the ingredients to remake my Gluten-Free Pumpkin Goat-Cheese Cheesecake. (Because we have gluten and lactose issues in this family.) (I just thank God no one is allergic to sugar, because this would have put them in a coma.) I made one on Wednesday night, you see. But it seems I was overzealous in greasing the pan. Because this happened:

After throwing the pot holders across the kitchen of my mother-in-laws house with ugly groans, she and Jaana and my niece all came in to see what had happened. I stood there wanting to scream, curse, cry and laugh all at the same time. And that, my friends, is quite the feeling. Everyone encouraged me to remake it. But do you know how much goat cheese costs? Anyhoo, I fortunately found my saving grace in Kroger and the goat cheese was cheaper than it had been at Publix so that was a bit of a consolation.


6. Early Shopping. Remember how I mentioned a couple weeks ago that I typically am more of a last-minute gift getter at Christmas-time? And how I had at least made a list so I felt a little bit better? Well I can top that: we’ve done a good amount of shopping already. In fact, shopping for the kids is 97% done. It’s insanity.


7. Hope for the Cougs. No, that’s not the name of a very touching and heart-felt ministry. It’s hope for my beloved Washington State University Cougars. We are the football team who does really, really well once every 15-20 years. (But you’ve seen our flags flying at every ESPN College Gameday in the very back for over 112 consecutive Gamedays.) Our most recent claims to fame were the years with Drew Bledsoe, and the infamously famous Ryan Leaf and the Rose Bowl of 1998. We also can claim a brief stint of publicity when Coach Mike Price went to Alabama and then was fired before the season even started. But let’s not rehash ancient history. I’m talking about the here and now my friends. And it’s about time that the Cougs regain acclaim in the polls and bowls. And now that WSU has hired Mike Leach as the head coach, you’re hearing it here first: TOP 25 NEXT SEASON, MY FRIENDS. And I can assure you I will be the biggest fan in North Carolina screaming from the mountaintops to “…oooooo Cooouuuu….” (and you’ll only get that if you’re one of three people).


8. Christmas Blend. With deep sincerity I give thanks for this each and every morning.


9. Maturing. I’ve been working on a post about this for a few weeks, and I’m still not there. But God’s growing me up. Imagine that.


10. Puppies. This household has puppy fever badly, people. B-A-D-L-Y. Fortunately the kids have put a puppy on their Christmas list. UNfortunately, Greg and I keep finding puppies we have to have right. this. minute. Only to discover they have been adopted merely hours later. Or we’re not ready to financially commit in a matter of minutes. FORtunately, we trust Santa-ahem-God and that He will provide The Perfect Puppy at The Perfect Time. Right??


Your turn! Let me know what you’re thankful for this week and share the love. Leave a comment below or link up with Candra. It’ll bring more luck than rain on your wedding day.