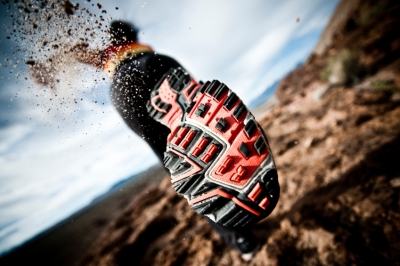 It started 15 years ago when I ran toward an escape. Life was getting really hard and really complicated. I graduated college. My parents divorced. My best friend got married. My mom remarried. So I boarded a plane in Seattle and almost five hours later was greeted by my dad at the gate in Atlanta with a “Welcome Home.”

Not surprisingly I fell into a pretty big depression, although at the time I didn’t recognize it. And when God tried to reach out to me, I refused His hand and ran.

And I ran fast; broke records; sprinted with all that was in me.

Time passed. My mom had another baby; I had a sister. She died. Life continued to get more difficult and more complicated.

So I ran further. I ran faster. I ran harder.

I covered a lot of territory when I was running. Marathon-worthy, really — 26.2 miles of desperation, neediness, loneliness and fear — from corner to corner in Atlanta.

And then, what happens to most runners, happened to me – I hit the wall. I crashed and I burned. Everything blew up in my face, fell apart around me, and I just. couldn’t. take. another. minute.

It was night, it was dark, and I was alone. And lonely. And broken. And confused. And lost. I got down on my knees and did the only thing I knew to do — I stopped.

From that moment on, life as I knew it changed. Those I was in relationship moved on or moved away; life intervened (rather, God intervened) and physically removed all the hinderances that kept me from pursuing Him instead of everything else. I found a church and spent six months in the back row on Sunday nights crying my eyes out. It was healing. I was healing.

As I ran toward God, He stood before me with His arms wide open, anticipating for my arrival. And He was smiling. And as I ran, He showered me with grace and mercy even though I was covered in ashes as I ran. He embraced the bag upon bag of garbage I brought with me on the run, and tossed it over His shoulder without so much as a word.

But I continued to look back at it. It was hard for me to let go of the shame, guilt and condemnation of the race I had been running.

I started running last summer. Physically running – outside, on the treadmill, on a track. For some reason I had a longing to start when I was pregnant, and as soon as I was physically able I started the process.

At Christmas, I announced to Greg that I wanted to sign up for a race. I registered myself for the Georgia Half Marathon. I figured if I was up to six miles already, then getting to 13.1 in three more months would be a piece of cake. I registered. Game on.

Then we started Beth Moore’s updated Breaking Free Bible Study at church. I was participating, but had no specific bondage I thought I needed freedom from. God decided differently.

As we approached race day, I had not really focused on the race route whatsoever. I knew it was starting and ending in “downtown Atlanta,” but I did not look at the course at all. As the Bible Study started, I decided to look at the full course map. And then fear overtook me. Shame crept in, and brought with it Guilt and Condemnation.

The race course was along almost every part of Atlanta that I had “lived” previously. All the places I had been, the places I hung out, everywhere that represented who I was and how I had lived. God was telling me, “It’s time for you to break free from your past. I have forgotten it, but you haven’t. Why?”

It was time for me to break free. I had no idea.

As I trained for the race, God started showing me images of myself running through those very places I used to run to. But this time, instead of running to them as a means of escape, I was running through them as a new creation. And with each mile, I was scooping up heaps of ashes of my past. I saw myself crossing the finish line. As I crossed, He declared over me, “It is finished.”

I stopped and wept.

A multi-marathoner once told me, “You’re only called a ‘runner’ once you wear that bib on your shirt. Until then, you just run.”

As I approached the starting line, fear started to let loose. As I got going and hit the first couple of miles, everything drifted away and I just ran. It was just me doing what I like to do. A few times I approached places that tempted me with haunting memories, but instead of falling victim to them, I just pressed on, arms pumping and head down. Then I started to approach one particular area of town that held many painful memories, and as I rounded the corner of the intersection I saw throngs of people cheering on all the runners. Finally, I was able to let myself smile and enjoy the race.

“Therefore, since we are surrounded by such a great cloud of witnesses, let us throw off everything that hinders and the sin that so easily entangles. And let us run with perseverance the race marked out for us.” (Hebrews 12:1)

When I crossed the finish line, a woman put a medal around my neck and said, “Congratulations!” Next a man approached and wrapped me in a foil blanket to trap in the heat. It was over. It was finished. 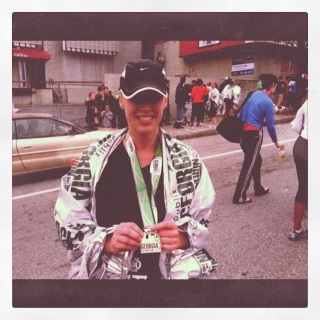 I’m slower than I used to be. But I’m consistent. I’m steady. And most importantly, I finish.

I don’t have a medal, but wear a crown of beauty instead of ashes (Isaiah 61:3). I don’t have a foil blanket, but I have a garment of praise (Isaiah 61:3) and His banner over me is love (Song of Songs 2:4). I still have a bib on my shirt, but instead of a number, it says, “Monica – cleansed, forgiven and redeemed.”

“However, I consider my life worth nothing to me; my only aim is to finish the race and complete the task the Lord Jesus has given me — the task of testifying  to the good news of God’s grace.” (Acts 20:24)

“When you walk, your steps will not be hampered; when you run, you will not stumble.” (Proverbs 4:12)