I’ll Have the, Uh, Eggs Benedict With the Uh, Hollandaise Sauce on the Side 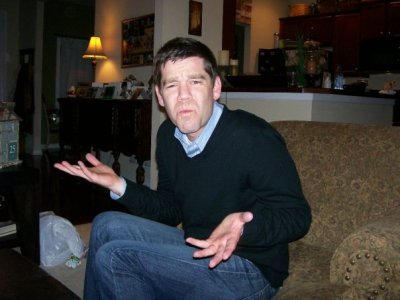 Other working titles for this post included:
“random with a splash of nostalgic”
“i’ll take ‘my brother’s keeper’ for $200, alex”
and
“girl with the hat who stinks from the gym say what??”
In other words, BE. WARE.
The picture above is of my little brother. (His name is Mike, but now that he’s all grown up and got a Master’s Degree he goes by “Michael.” I refuse to call him Michael. And just to irk him, Jaana calls him Uncle Mikey. I’m sure just to irk me back, Mike will start calling Paxton “Pax.” Argh.)
This picture is one of favorites for a couple reasons: 1) I love that I caught this moment on camera, and 2) it reminds me of his old driver’s license. Some years ago, he renewed his license and asked the picture lady, “Where do I stand?” She just so happened to snap the picture at the exact moment he started to ask the question, however, and for about 5 years his license photo was him in the beginnings of a “wh…” expression. Just like this one. High-larious.
I’m getting awfully nostalgic about my brother lately. I usually do miss him, of course, but have gotten used to the seeing-him-once-or-twice-a-year pattern that we’ve established over the past 14 years. I should be used to it. In fact, I just saw him in June. So for me to be missing him so much now is a bit unusual. But you can’t tell your heart to stop loving, now can you?
I’m so proud of Mike. He has done some pretty extraordinary things in his short 34 years, and I admire so much about him — his drive, his motivation, his commitment, his loyalty. He has amazing charisma and people are drawn to him wherever he goes. He also has a killer smile, which helps, but I just couldn’t put that picture here. (That would be too nice and un-big-sisterly of me.)
Growing up, we didn’t get along or respect each other as we do now. We went through a lot of battles (literally!) with each other, and endured some bigger battles at each others side. We have some pretty big differences of opinion and beliefs, but respect each other regardless. And always, love wins out. I adore him madly.
Mike is engaged now, and will be getting married in exactly one year and two days. I. CANNOT. WAIT. It’s going to be a small, intimate wedding of just family in Maui. Yes, that’s right. MAUI. (Green is so not your color.) Greg is going to be the officiant. Jaana the Flower Girl. Paxton the Ring Bearer. And yours truly? I’m going to be the Best Man. OF COURSE! When he asked me I was in the frozen food section of Ingles and the chicken nuggets door still has a few tears frozen in place on it.
I think it’s because he’s now in the official “you’re getting married” phase and I’m 3,000 miles away that I miss him so. I really wish I could be there to just be around while he and his sweet and adorable fiance plan and prepare. I wish I could be there for the upcoming showers and gatherings. And oh my gosh, am I supposed to plan a bachelor party??
Some of my favorite Mikey memories:
I wish Jaana & Paxton got to spend time with Uncle Mikey on a regular basis. He is the best uncle ever. And now that he’s getting married and will have his own family one day, it makes me sad that I might not get to spend the time with them that I want to, either. I guess I will just keep on making the most of the time we do have. And yes, we’ll always have Maui.
Thanks for enduring this sappy post about my baby brother. I pray Jaana and Paxton will love each other always as Mike and I do, always determined that no matter what…we’re family and always will be. (Sniff, tear)
Now if you’ll excuse me, I need to start pricing tuxedos. For Maui.

5 thoughts on “I’ll Have the, Uh, Eggs Benedict With the Uh, Hollandaise Sauce on the Side”